Survey On Depression in Old Age


Survey conducted by Agewell Research & Advocacy Centre
(for Needs & Rights of Older Persons)
September 2010
Quotations by Some of the old people who were interviewed
Brij Bhushan Sharma and Shaymla Sharma, both in their 80’s are forced to live alone in their quite big house located at Greater Kailash. Their sons are settled abroad. They hardly visit them, even for months; they could not talk to their sons and grandchildren. Money is not a problem for them at all, besides their good income from their investments; their sons too send money for them.  But due to loneliness and isolation they have been facing depression for years. Both of them suffering from multiple diseases and have to visit their doctors almost every day.
On the other hand a 75-year-old lady Harjeet Kaur, who lived in a traditional joint family of 8 members, feel also suffering from depression syndrome. She says, “I had worked hard for the welfare of my children and even grand-children, but now they have no time for me, instead they treat me as a burden on their family. My daughters-in-law, who spent most of their time, also don’t appreciate my opinion in family matters. Due to physical weakness I could not go to meet my old friends or relatives.”
65-year-old widower Javed Ali of Shahdara lives alone in his house. His sons & daughters left him and settled in other parts of the city. He worked as a carpenter, now his body doest not permit him to do work hard. He anyhow managed to take care of his daily needs.  He has no major diseases but he felt depression due to lack of family support. Depression caused a lot of tension in his mind. When he visits his grandchildren, he felt much satisfaction, but circumstances again part him from his grandchildren. It seems that he is cursed to live with his loneliness silently and ungrudgingly all alone.
Pankaj Verma, a 70-year-old retired school-teacher has a full-fledged family with caring family members, but he is depressed. His reason of depression is his chronic illness, which rendered him bedridden. He along with his family members has spent a lot of money on treatment of his illness. He cursed himself that his illness has snatched all the money and happiness from his family. He could not go outside and meet his friends/relatives.
These are few examples of common older persons from different socio-economic backgrounds, but their ground reality is same – they are suffering from Depression in Old Age.
Agewell recently conducted nationwide survey amongst 10000 older persons. It was found that:
·        In 71% cases of older persons, in spite of their active participation in family’s financial matters as well as social obligations and having originally possessed major part of the household/land property, younger family members are ignoring them.
·        According to 55% older persons, social interaction is one of the major factors that determine level of isolation in old age. In rural areas people have more social interactions and less pain of isolation or loneliness.
·        73.5% of older persons in urban areas have limited access to social interactions, due to various reasons; consequently they face lower self-esteem and decline in interpersonal skills. They are also found to be more self-conscious.
·        39% of older persons living in joint families and even in nuclear families have limited or no interaction with their own family members. Interpersonal relations are not found healthy in many cases. This is yet another reason of their loneliness in old age.
·        Analyzed that in opinion of 86% older persons isolation or loneliness in old age is critical, as it leads depression/ nervousness causing many diseases. It does not only weaken their mental health but also affects physical health in old age.
·        Elderly women (46%) were found less isolated due to their inner strengths than elderly men (31%), like patience, fine-tuning with family/society members, etc.
In pursuit of its overall objective of “Facilitating Better Life for Older Persons”, Agewell Foundation as a part of its on-going initiatives brought out a booklet “Depression in Old Age”. The aim of this publication is to provide a guide to the causes of Depression in Old Age, its symptoms, and ways to overcome it.
According to Himanshu Rath, Founder Chairman of Agewell Foundation said, “Depression is quite common among many of the people, particularly in old age. It is a major social challenge that cannot and should not be ignored. However, to fight Depression in Old Age, both the suffering older persons and the family members need to join hands and work together to bring back the golden happy times.”
Special features of the booklet:

Causes of Depression in Old Age

Causes of depression varies from individual to individual. Through the booklet it is attempted to identify every single reason of depression in old age. Knowledge of causes would certainly help in taking precautionary steps.

Symptoms of Depression in Old Age

Sometimes, people get confused about dementia & depression. They treat them as diseases of same family. But the reality is much different. This booklet provides better understanding of these two diseases, which can be helpful for many affected people.

Treatment of Depression in Old Age

There is no specific treatment of Depression in Old Age. Indeed treatment of depression is mix of counselling, interaction, psychological treatment and medicines. This Booklet emphasises that family support is like a panacea in Old Age.

Tips for helping a depressed older person
This booklet contains few tried and tested practical tips for combating depression, particularly in Old Age, which may help depressed older persons to a large extent. In this section, role of family members, relatives, friends and caregivers has also been described.Self-Help for Depressed Older

In today’s society of nuclear families, majority of older persons live alone in their houses, especially during daytime. Sometimes they feel much depressed, during that period when no one is around. In such situations self-help techniques help a lot. Booklet suggests that older persons should encourage self-help in their lifestyle and organise self-help groups in their society to keep themselves busy, so that depression could be kept away.

This booklet on Depression is being circulated as well as distributed for Free by Agewell on request by sending a mail at agewellfoundation@gmail.com or it can be downloaded from its website www.agewellfoundation.org.

Popular posts from this blog

January 01, 2019
Winters coupled with pollution forces elderly to seek warmth & emotional connect with family members
Most old people have to suffer a lot due to harsh weather conditions and ever increasing pollution level during winters. It not only affects them physically but psychologically as well. Agewell Foundation has recently carried out a survey across Delhi-NCR (based on Agewell volunteers' interactions) during this month with 1500 elderly living in the area and come up with some exciting findings.
Major concerns of elderly during winters ·When older persons interacted during the month were asked about their major concern during winters, most of them i.e. 21.7% elderly respondents claimed that they feel depressed during winters as they can't go out of their houses for days due to cold conditions and they hardly find anyone to interact with. ·21% elderly respondents claimed that their major concern is rising pollution level during winters, which causes many health related problems and…
Read more 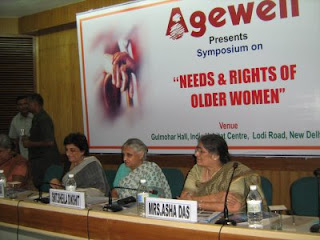 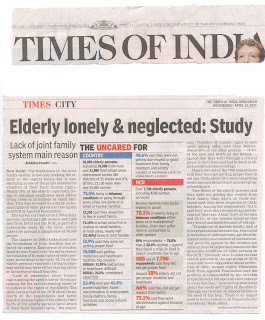